Going back to school this week was quite a shock.  We have had two weeks of no schedule and if it hadn't been for visitors I suspect there wouldn't have been even one day where we were properly dressed. When I put my work shoes on on Monday morning I actually thought there was something wrong with my ankles until I realised that I was simply unused to the sensation of wearing heels and any sort of supportive footwear; I have been wearing bed socks with my wellies,  bouncy fake Uggs and furry slipper socks. There were collective sighs all round as we dragged out school bags (although I suspect that L's sigh was one of relief as he gets to enjoy peace and quiet again). Even the brand new fully-stocked pencil cases, supplied by Santa & Co, couldn't lift the 'back to school' gloom.

When the alarm went off at 6am on Monday it honestly felt like I was coming round from a general anaesthetic.  I immediately consulted the calendar and worked out though that there were exactly five weeks of school-led structure left and then we get another mid-term break so there really is very little to moan about.  It is perhaps one of the only monetary benefits of being a teacher - all those paid weeks of holidays.

As a teenager I was desperate to leave school.  One of the main reasons for hating it so much was the capital A-line grey skirts and maroon striped ties of the uniform. I've never been one for conformity so it seems quite ironic to me that I have ended up back at school all this time later with all the rules and regulations that extend to teaching staff too.  At formal events we are even required to wear academic gowns though I have to say they are very good for smuggling whole bags of illicit sweets into assembly or for concealing a hot water bottle to make sitting in the freezing chapel more bearable.

The UK has a long history of school uniform dating right back to Henry VIII.  Then the long blue trenchcoat-style jackets had some practical and cost saving benefits, though I'm sure they must have been heavy and most certainly humbling to wear.  The supporters of uniforms have a long list of purported benefits - suggesting that they somehow instill discipline and even improve results. Of course, the most common given reason for uniform is that it is a great social leveller, but there are so many other just as obvious ways to display your wealth or lack of it; a quick glance at mobile phones, shoes and school bags for example.
The school I teach in has a distinctive uniform that I have to concede the children seem proud to wear.  They still have their complaints though, not least about the wide unfashionable trousers and stiff wool blazers that smell like wet dog the minute they become the slightest bit wet - which is all the time in Scotland. Older girls will attempt to shorten their kilts by rolling over the waistband but this results in a deeply unflattering pleated tutu - a bit like a tartan version of a Greek dancing skirt.  They're lucky in having a fairly kind ensemble. They could have ended up with a Tudor-era uniform complete with Malvolio-inspired yellow socks or a ridiculous ribboned straw hat.


You can probably tell, I'm not really an advocate of uniforms; I find them restrictive, impractical and, well, a bit bizarre. Ties especially I think are nasty germ-ridden things and girls in ties? - what's that about!  I was very surprised when S really liked her tie when she started school in Yorkshire, but then I realised that this was only because she found it very useful to use as reins when playing horsey games with her friends in the playground! The boys at her school preferred to tie them around their heads Rambo-mode. Older teenagers would attempt to tie the biggest knot possible, not a Windsor or a half-Windsor but a full on Windsor Castle knot which they would then leave askew in the style of  Lauren Cooper. My colleagues try to persuade me to the merits of uniformity saying, 'It will prepare them for the real world of business'.  Put that off for as long as possible I think - I have no desire to see that my children are 'ready for work'.  No! Back to weekend rebellion say I - bring out the fuzzy leopard boots, the hoodies and the onesies and let's turn our backs on the real world, for 48 hours at least. 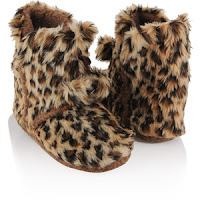 Posted by Mama Macfennell at 17:44