Old Twelfth Night traditions are pretty strange sounding to a modern community and worryingly reminiscent of  'The Wicker Man' style of revelry.  I have a charming book called 'Festivals, Family and Food' that details many of the traditions, games and recipes that have been forgotten (though possibly for very good reasons).  In it a recipe is given for a special cake - a 'Galette des Rois' baked to celebrate the three kings and containing a dried bean and pea (yummy).  If I ever manage to find ground rice in our local Asda I may try to make it.  Apparently, the person who finds the bean is the king for the night and the person finding the pea is the queen .  They rule the household for the evening and take charge of the 'games' .
Traditionally, games seem to consist of cross-dressing, supping bowls of ale, riotous dancing and playing tricks and practical jokes on friends and neighbours - sounds like a normal Saturday evening in Dunbar to me.

In Western Christian culture the 6th of January is celebrated as the Epiphany - the arrival of the three wise men or the Adoration of the Magi  if you want to be proper in your liturgy. Epiphany means 'to make known', 'to show' or 'to reveal' and so I guess by seeking out the Christ child and bringing gifts for him they 'reveal' him as the son of God and make it known that he is King. As a child I could never understand the business of Frankincense and Myrrh at all; what rubbish birthday presents! Gold made perfect sense but I could not comprehend the symbolism of what to me sounded like an ancient equivalent of Febreze and Vaseline.

Now I am older (but not a lot wiser) I can appreciate that these were rare and  highly valuable gifts. They were also symbolic and prophetic. From a quick Google search I can also update myself with the modern thinking that there were probably more than three kings, that they were not really kings as such but more likely spiritual leaders, prophets or even early astronomers.  Despite the Christmas card depiction of camels, we do not really know their mode of transport just that it must have been a long and dangerous journey.  Were they led by a star, a comet or some other  spectacular celestial event? Again, we don't know but it seems fitting to imagine a brilliant star and three exotic kings in  resplendent robes convinced of the birth of the true Messiah and determined to find him. In this sense it seems a shame that we don't generally acknowledge Twelfth Night as anything other than a bad luck superstition to do with housekeeping. I think to put this right I will dig out my three kings from their hibernation in the loft and put them back on display and indulge in a little merrymaking myself. Now, where's my crown... 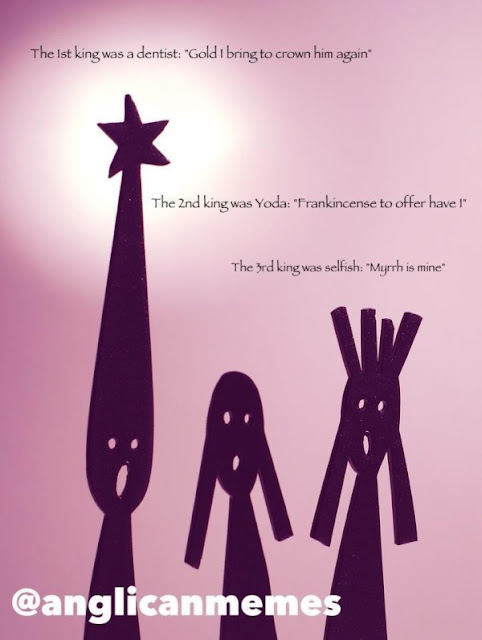 Posted by Mama Macfennell at 20:12