And it was all yellow... 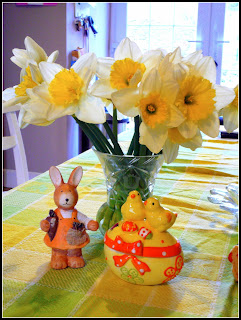 It's that time of year again - the long weekend of gluttony.  I'm amazed at how incredibly commercial Easter time is now.  When I was a child you considered yourself lucky if you managed one little egg with a pitiful amount of sweets inside; now children expect an avalanche of chocolate, be-ribboned Easter chick bags stuffed with egg-shaped mallows, at least one set of fluffy bunny ears on a hairband, their own Happy Easter banner and table confetti and a personalised and suitably decorated mug (with more of the brown stuff inside)!

Perhaps in these economically-challenged times, the retailers, in desperation, have gone all out to try and create another Christmas in Spring (Spring complete with snow and Siberian winds in our case). 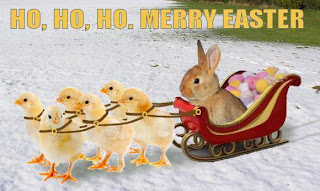 I think if you asked about the origins and meaning of Easter to many children they would struggle to answer now that it is so inextricably linked to cute baby animals and Easter Sunday a festival of chocolate. I was reminded of a conversation I once overheard on a bus between two gormless and woefully ignorant teenage girls:
One asked the other, "What is Easter about then?"
The other replied, "It's when Jesus died init"
There was a pause and then the ludicrous response: "He didn' live long then did
he - cos he was only born in December?!"
I got off at the next stop shaking my head in despair. 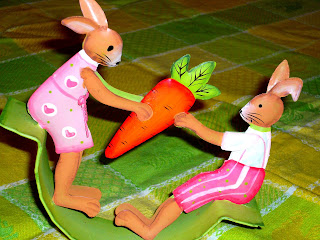 The appearance of the Easter bunny is all a bit random though; I don't remember any mention of eggs, hares or their fluffier cousins in the gospels. This can only be explained by the fact that pre-Christian religion and traditions have become muddled up with the church festival.  Specifically, an old Teutonic myth that says one Winter day the fertility goddess Eostre was passing through a forest and found a bird dying in the snow from hunger and cold. The goddess turned the bird into a hare because they have warm fur and can find food more easily than any bird. And so the 'bird bunny hare creature' survived the winter and when the spring came the animal started laying eggs because, well, because it it was once a bird I suppose. Rabbird then decorated every egg leaving it to Eostre as a sign of gratitude. I relayed this little piece of interesting folklore to S but she just looked blankly at me with the same look she reserves for conversations about fractions.  All she wants to know is whether we can have an Easter egg hunt in the snow!

For the Wonderful Man, Easter means another trip up into the loft to fetch the Easter box of decorations (see it is getting to be exactly like Christmas). He does not take well to scrabbling about in confined spaces and he is not particularly interested in pretty tablecloths and ornamentation.  So it is only me really who appreciates the abundance of yellow and our growing collection of egg cups and bunnies. My favourite decoration is probably the oldest and most battered. As soon as 'chick family' come out complete with blu-tack feet and cocktail stick parasol he groans - "Not them again - surely we can throw them out".  This attitude will never do and he'll need to get into the Christmas Easter spirit if the bunny is to leave him anything other than droppings.