Being St Andrew's Day I thought I would write a post about living in Scotland and the differences that we've experienced between England and its northern neighbour. But before I begin I should say that I'm no cultural expert and do not profess to be very knowledgeable about Scottish history and politics (I could write all I know about the pros and cons of independence on the back of a postage stamp!)

Patrons & Holidays
This seems a suitable place to start, today being in honour of Scotland's patron saint. Ask the average Scot and they're not too familiar with the saintly Andrew at all other than the obvious connection with the town of St Andrews, now forever synonymous with Prince William and Kate Middleton. Saint Andrew isn't even just the patron saint of Scotland but shares his patronage with a whole host of other countries including Greece, Russia, Romania and - randomly - Barbados.  The fact that some of the poor fellow's relics were sent to 'ends of the earth' (a.k.a Fife) where the town was named after him, and that he was crucified on an x-shaped cross (the inspiration for the Saltire, national flag of Scotland), is really all I know. For the girls, St Andrew's day means only one important thing and that's a day off school on Monday!

That's not the only different holiday in Scotland compared to England. The school year starts mid August, half terms are generally referred to as mid-term and for many schools there is no break at all in the summer term but certain counties have a 'tattie picking' two week holiday at the beginning of October.  New Year is, of course, long associated with Scotland. Hogmany (Scots word for the last day of the year) is widely and loudly celebrated across the nation and the Scots even get an extra day's holiday to nurse their hangovers. I'll write more about this institutional revelry in January if my post-Hogmany head allows me to sit upright to type!
Language & Dialect
There are two expressions I used to find particularly confusing as a Sassenach (English person). Rather than saying that they will 'arrive at' a certain time, the Scots tend to say they'll 'come through at the back of'. I was left wondering whether they would be stopping at all and if the 'back of' an hour meant before or after?! Another odd expression is the word 'outwith'. This seems to be peculiarly Scottish and means 'outside' rather than 'within' but then I'm still not completely sure... 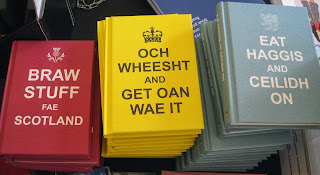 I completed my teacher training in Scotland and found myself wondering who Ken was and why he was so popular until a fellow teacher kindly explained that 'I dinnae ken' meant 'I don't know'!  That was just the start of my misunderstandings and confusions with the Scots language, many terms of which are used throughout Scotland by young and old alike.  I particularly like the fact that there is a plural form of 'you' - 'youse' though I wouldn't dare use it and I love the sound of crabbit (grumpy), sleekit (sly) and glaikat (stupid).  I could 'blether' (chat)  a lot about Scots so will save that perhaps for another post.

Food & Drink
Scottish food does not have the best of reputations (in England anyway) and before we moved here I, unfairly, expected to see deep-fried Mars bars in every chippy and a choice of pie, pie or pie on a menu. I've been pleasantly surprised though by the many restaurants prepared to use traditional ingredients and recipes but with a creative and culinary twist. Wild salmon, Scots beef, lobster, venison, heather honey and fantastic Perthshire raspberries are just a few of the many delicious Scottish foods. I have to admit though that when we first moved here I had to look up Cullen Skink to see what on earth it was. And I still remember H, aged 4,  asking anxiously, 'What is haggis?'. I decided to be honest and explained it was chopped sheep heart and lungs mixed with oatmeal. 'That's alright then,' she said, looking relieved. 'At least it's not meat!' I'm not a vegetarian but my carnivore instincts do not really extend to haggis, and 'neeps and tatties' is a bit too reminiscent of baby food for me. 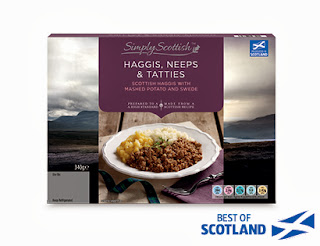 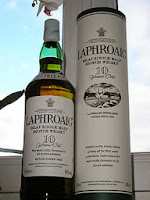 Drinks, well, whisky is the obvious one. No one in Scotland ever refers to this as Scotch and note there is no 'e' as in 'whiskey'?  People's hospitality and generosity have meant many a 'wee dram' and most people have a favourite. Mine? Laphroaig, of course - one of Scotland's most medicinal.  I love this description:

'Muscular deep peaty tones, seaweed-led, with a hint of vanilla ice cream and more than a whiff of notes from the First Aid box (TCP, sticking plasters etc). The oak is big with an upsurge of spices developing - cardamon, black pepper and chilli.'

For little Scots there's Irn-Bru, the number one best-selling soft drink in Scotland. Distinctly orange, this fizzy drink is so full of banned e numbers (everywhere but Scotland), sugar and chemicals, that our two girls are only allowed the smallest amount and then only on special occasions (basically when we are enjoying an occasion so much that we don't notice them helping themselves).  The drink is known for its sometimes controversial advertising; my favourite advert was the Snowman parody for which I'll leave you with a festive link.

Happy Saint Andrew's Day One and All

Posted by Mama Macfennell at 19:41

Email ThisBlogThis!Share to TwitterShare to FacebookShare to Pinterest
Labels: Scotland