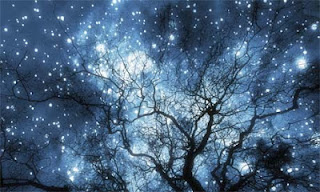 In place of This Moment I thought I would share 'This music' instead - a seasonal and an inspirational moment.  I am never quite sure what I think about contemporary choral music but this is a masterpiece.  Whatever your religious persuasion you cannot help but feel spiritually enriched by this work.

If you don't know him already then Jonathan Dove is a modern British composer. 'Seek Him That Maketh the Seven Stars' was first performed in 1995 and inspiration comes from Psalm 139. It begins with what can only be described as a musical equivalent of an image of thousands of twinkling stars. I was very privileged to hear this being rehearsed in Wells Cathedral one time and at its peak it was as though the music blew the roof of the cathedral away and gave a glimpse of the magnificence of the heavens.  At the end I left feeling thoroughly uplifted and as light as air itself.

Email ThisBlogThis!Share to TwitterShare to FacebookShare to Pinterest
Labels: Music, This moment, This music