I love Christmas time and have never lost that feeling of childlike anticipation that accompanies advent. All our Christmas decorations are stored in boxes high up in the loft, but each year one box is held back and put safely under our bed.  This is the advent box and the first precious item retrieved from it is our advent wreath.  These are traditionally meant to be a handmade circular garland of evergreens but long ago, realising my creative incompetence, I acquired a pretty Swedish-made crystal one.  We light one more of the four candles each Sunday in the run-up to Christmas.


I'm sure L enjoys the season too but each December he complains with Scrooge-type mutterings about some aspect or other of the preparations.  This year he was most unseasonable about my choice of 'stupid' gold candles and in his frustration, which manifested as constant rubbing of his face and much sighing, he ended up with gold-speckled chin and highlighted eyebrows. I decided not to inform him about his unintentional 'make-up' even when he went off to the village committee meeting where I'm sure the elderly members must have been surprised at his 'brilliant' appearance.

My mother-in-law, who is Danish and far more tuned in to yuletide traditions, used to bring us a beautifully illustrated advent candle from Copenhagen every year with the numbers 1 to 24 marked down the side.  This year though she has been unable to travel and I was forced to find one myself.  I turned to the trusty internet and felt sure that such an item would be in stock but I had no joy.  L suggested, unsympathetically, that I 'just make one' from a normal white household candle and use a black Sharpie pen to write on the numbers!  Clearly, he has not inherited his mother's Scandinavian genes so, undeterred, and ignoring his ugly suggestion, I set off on my advent journey to that beacon of hope - John Lewis. There amongst the December chaos of celebrant shoppers I found a simple but attractive candle more in keeping with my  aesthetics.  I was thrilled with my minor commercialism and smugly made my way to the heaving queue at the checkout where I paid the grand total of £3.50.  The lady at the till seemed thoroughly bewildered by the appearance of real money, let alone actual coinage, and her expression seemed to suggest that I was not materialisitic enough to shop at such a debt-inspiring establishment.  My smile though faded when I went to leave the car park and paid £4.80 to do so; I'd only been in there for 20 minutes! Nevermind, I think it was worth it.  Each evening at supper time we light the candle and admire its glow. We watch the numbers slowly melt away and we are mindful of the season and its meaning. 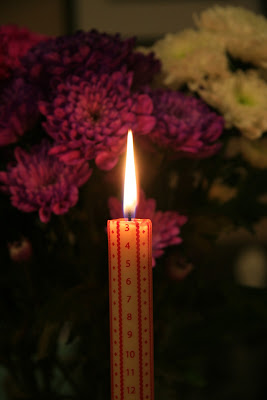 Light the Advent candle one
Now the waiting has begun
We have started on our way
Time to think of Christmas day.