Christmas never feels quite like Christmas until you have a tree.  I've often admired artificial trees and their perfect symmetry, let alone their distinct lack of needle drop, but for me there's nothing quite like a real evergreen brought indoors to start yuletide good and proper.  Just a whiff of cut pine and I'm instantly transported back to my childhood. I can remember vividly my father tying the tree to the roof of the car and then struggling to find something to stand it in and then to keep it straight.  It was before the days of special stands and I seem to remember that generally he resorted to using a bright orange plastic bucket heavily disguised with green crepe paper and filled with heavy stones.  He would then go about untangling the fairy lights and attempt to drape them around the tree. He was very exacting about this and the end result was perfectly placed lights but on a now leaning Tower of Pisa tree with half the needles on the floor.

In the Little House we've been a little slow getting into Christmas mode this year and, keen to keep the expense of Christmas down, we decided to just buy one of the cheap ready-netted trees from our local supermarket rather than selecting one of the more extortionate varieties from the garden centre. The resulting purchase I have begun to refer to as 'Frankentree' (reminiscent of Frankenstein's monster rather than anything to do with frankincense). There is nothing standard about it and it appears as if it has been grafted together from random off-cuts.  Clearly from the outsize section, it has a very fat bottom that bulges out and hangs down at the back (I know how it feels!) The middle is completely disproportionate; there are disconcerting gaps whichever way you turn it and there are odd stunted sprigs. The top half has bare patches on the trunk with completely different triffid-like branches that come out at odd right angles more like some weird coat stand than tree.

Once fixed in the stand and not looking a whole lot better 'we' had to work out where it should go (that's the royal 'we' where I direct, L does what he is told and I take the credit) .  'We' had thought that the most likely position would be in the front window and so I had L move the tall and awkward wooden cabinet and glass lamp in order to put it there.  But no, in that spot no one would be able to get in and out of the room without having to brush past it and so out it came again and back went the cabinet and the lamp.  Next 'we' decided that it might be better placed next to the sofa.  L moved the other small, but surprisingly heavy, coffee table out of the way and upstairs along with yet another lamp. Once in situ it became obvious that the door would bash against it and it would probably dry out as it was opposite the wood burning stove. So, the coffee table came back downstairs and the lamp was connected once again. 'We' decided that the corner of the room by the other window might be better and so S's keyboard was moved out and went upstairs.  L searched high and low for an extension lead so she would still be able to do her daily practice. Eventually, he managed to find one and get everything working again. He informed me that the football had started. But, now you could not really see the television or get to the cupboard with the control for the central heating.  Not very practical so out it came again and stood in the middle of the room for quite some time while L muttered...and sighed ...deeply.  Finally, 'we' decided that the corner really was the only position for it to go and so the TV and the the other even heavier cabinet would have to move along and the Sky box and DVD player unplugged and then reconnected to the side.  'We' needed another extension cable but that was alright because it was half time anyway. At last 'we' managed to make it fit and I can see why L thought to suggest this position in the first place. He can still make the remote work if he walks over to the other side of the room and kneels down.

It did irritate me though that the picture above the TV was no longer central and so I suggested to L that 'we' re-hang it.  He went outside. I thought it was to find the hammer and picture hooks but when after half an hour he still hadn't returned I went to find him.  He was sat on the wood pile in the barn wearing two coats and listening to the post-match discussion on his portable radio.  Two empty beer cans were lined up beside him.  'I've found the lights,' I said enthusiastically.  He managed a weak smile.  At least I think it was a smile, it was quite dark by then so it was difficult to tell. 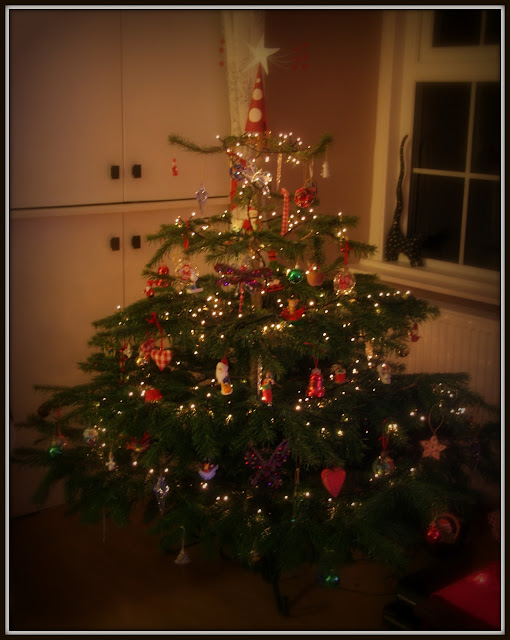 Posted by Mama Macfennell at 22:25