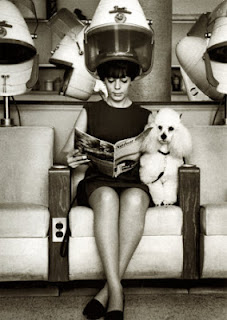 Like Luna I am in desperate need of a haircut. Her soft white curls are turning into brown tangles with Rastafarian dreadlocks whereas my hair is turning white in a deeply unattractive witch-like way. Something needs to be done...to both of us.

I'm of the opinion that once you are past a certain age (ahem...) that you need really good hair to get away with having it long. I envy women with lovely locks who seem to be able to just run a comb through it in the morning then look like they've spent half an hour styling it. When I wake up in the morning a glance in the mirror confirms my worst fears - I am a fat-faced version of  Kierston Wareing from Eastenders; her claim to fame must surely be the worst hair on television!  At least though she has other eerr... 'assets' to distract from her less than crowning glory.

Both my sisters are blessed with thick wavy hair while my hair hangs in a lank curtain of lacklustre mousieness.  As I've got older it has developed peculiar clumps of grey, like patches of mildew. Hair dye generally sorts that out but I can't do anything about its texture.  The hair at my temples has thinned to wispy white strands that stick out in all directions; I have seven natural partings including one from ear to ear and my triple crown has joined forces with my cows licks to make styling a mission impossible.

Back in the 70s when I was very little it was at least very blond but also very fly-away and prone to knit itself into terrific knots.  My mother had a pretty eccentric method of hair-washing and up until I was about five I was laid on the draining board and my hair washed in the kitchen sink! Her excuse was it saved her back leaning over the bath; I really hope she didn't use Fairy Liquid! She certainly never used conditioner and trying to get through it when it was wet was fine tooth comb torture.

Perhaps this is the reason for my aversion to going to the hairdressers.  Most of my friends look forward to a bit of pampering but I make an appointment reluctantly and then sit there staring at my disappointing reflection in the many mirrors and trying unsuccessfully to get enthusiastic about fancy hair products. When asked what sort of style I'm after I usually just say, "Do what you can" and "Good Luck".

I have tried an extensive array of salons and as we've moved so many times my experience is countrywide.  When we lived in one small Scottish town there were no less than 10 hairdressers lining either side of the High Street.  Thinking about them now I am reminded of a game my father and I used to play.  On car journeys we would try and come up with as many creative shop names as possible. Hairdressers were easily our favourite.  You know the sort of thing -  Talking Heads, The Cutting Edge, Fringe Benefits, The Mane Attraction, The Hair Port... I've got you thinking now haven't I?!

Whatever the salon's name, I would normally at least enjoy flicking through Hello, enjoying a complimentary coffee, but I have a terrifically weak bladder and after less than three sips I invariably have to go to the loo; the ease of which depends on how far along in the washing, cutting, blow-drying process you are. The hairdresser loo is like no other.  You see, even in the more expensive upmarket establishments, hairdressers are rather neglected when it comes to their own facilities; the gloss paint and the high spec fittings are for clients only.  If you're just there for a half-hour appointment no-one expects you to need to visit that grubby broom cupboard sized toilet down the back stairs. 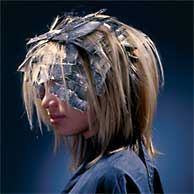 Once when I decided to treat myself to a full head of highlights (£130! I kid you not) I was stuck in the twirly chair for nigh on three hours and had to set off for the lav a second time.  I felt confident that I remembered where it was and pushed open what I thought was the right door only to find myself outside by the bins in an alleyway behind the salon. What was worse was that the door had closed firmly behind me and I couldn't get back inside. I was forced, much to the surprise of the Saturday shoppers, to walk right round to the front entrance in my Darth Vader inspired black cape and tin foil helmet!


I think I may have found a solution to my hairdressing drama. H has become really quite proficient at colouring my hair; there is the added incentive of not wanting to be embarrassed by the state of her mother. And this week a lovely sympathetic mobile hairdresser is coming to my house instead.  I'm hoping to lose at least two inches of split-ends and achieve a more coiffed appearance. Well, that's the hope; I'll keep you posted on the reality.

I'm linking up with The Monday Club and the very talented Sarah over at Hello Wall with this post. 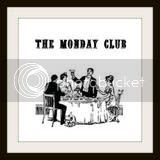 Posted by Mama Macfennell at 14:30