H was asked by her slightly nutty English teacher what one word was spoken most frequently at home. She replied without hesitation that it was the word 'what'. After a little confusion and her teacher thinking she hadn't heard the question, H explained how most of her family have terrible hearing. I think, in fact, that I am the only person in the household that hears anything at all, at normal decibel range anyway.


Many years ago when H was a newborn I came to think of The Wonderful Man as not wonderful at all as he never got up in the night.  Every night like the boxer's count I would drag my heavy head from its horizontal position, stagger about the bedroom in sleep-deprived drunkenness and complain, loudly, about his nocturnal deafness.  Gradually though I realised that he didn't quickly respond to her high-pitch mewing in the daytime either and whatever adult conversation I did manage to have with him, his replies were fairly limited (this of course may well be a male thing).

I tested my theory that his hearing was completely pants by telling him one afternoon that I intended to change H's first name and have her christened 'Oswald' instead and would that be alright. He scanned my face, presumably lip-reading, and, seeing that I was smiling when I said this, just nodded vacantly in agreement. I made an appointment at outpatients for a hearing test but like many people he wasn't keen on anything remotely connected to a hospital or being examined and simply went to the GP and had his ears syringed instead! So for a long while I resigned myself to having to repeat everything, with actions, and solved the problem of night-time uselessness with a less than gentle shove or the fail-safe method of a sharp pull of the nostril hair - works every time. 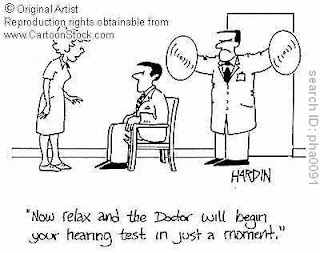 It was only three years ago that he finally decided to do something about his hearing and went to see the audiologist and have that test.  I went with him (to make sure he went basically) and it was no surprise to me whatsoever to discover that, for various reasons, some genetic and others self-inflicted, he did indeed have some mild hearing loss in both ears. Mild?! I could clearly hear the beeps he couldn't as they played through his headphones!  He was issued with pretty nifty hearing aids but then much to my frustration he rarely wears them.  You see the problem is that he associates hearing aids with old age and that will never do plus he is, though he won't admit it, incredibly vain and they're just not, in his opinion, attractive.

Both girls have taken after their father in more ways than looks and have had their issues with hearing too. H in particular has suffered repeated ear infections, though grommet insertion when she was younger helped. Like her dad too, she has bouts of tinnitus which can make good quality sleep difficult. All this goes to explain why 'what?' is such a frequent utterance in our house. Comical confusions and misunderstandings are many especially between similar sounding words. Here are some examples - 'comfy chair' and 'country fair'; 'Lion King' and 'violin'; and, most memorably, an entire and thoroughly baffling conversation about  'Disney' or as L heard it - 'dysentery'!