Nothing quite instills a sense of wonder like pure white snow. When you don't have to be anywhere, and you have all you need at home, then there's nothing more magical than the transformation the white stuff brings. Recently I've begun to feel a bit marooned in the sea of mud all around the Little House and everything has that January colour scheme of brown, more brown and...brown.  But this weekend all is bright and I have been transported into a Narnia-inspired winter wonderland.
I am so in love with the stuff that I've developed a bit of an obsession. It's driving L beserk. I text him from work exactly 10 minutes after I have arrived at my desk and then at 10 minute intervals: 'Is it snowing there?' I ask again, hopefully. I stalk the weather forecast constantly, consulting the BBC, the Met Office (even though I know they actually provide the updates for the Beeb anyway),  Netweather, Weather Outlook - they are all on my browser favourites. I am far more distracted by the possibility of a snow day than any of my pupils, sometimes even sticking my head (and tongue) out of the window to establish whether it is in fact snow falling or that most disappointing of five letter words in the English language - sleet.

I find myself getting caught up in the media hype that inevitably comes with even the tiniest amount of snow: 'Snowmageddon', 'Going Snowhere', 'Snowpocalypse Now', reports from 'The Red Zone'  - the puns and hyperbole are rife, but when you actually examine the facts we're generally only talking about centimetres of snow. Centimetres, I ask you - I've got a deeper layer of dust on my TV stand!

The trouble is that although snow is not uncommon in the UK, it's not frequent enough to foster any kind of resilience. It's as though the strain of maintaining that stiff-upper-lip stereotype becomes too much at the appearance of the first flake and most of the country regresses into a sort of national learned helplessness. We give in to hysteria and indulge in locust-like behaviour in the supermarkets, stripping the shelves of bread and milk in case we are stuck in the house for more than 48 hours and forced to eat each other. The Scots are a little more hardy but even the most stolid and resistant of school heads gives in and closes up the learning shop for fear of weather-related injury and resulting snowball law suit.


The petrol stations have long queues which I've never understood as you can't actually get anywhere and, even when the ploughs and gritters have cleared a way, stories about people being stuck in their cars for hours and hours make you too nervous to attempt it. My cousin's recent facebook status made me laugh. Clearly tired of RAC-inspired checklists on being properly prepared before embarking on even the shortest of car journeys, she concocted her own very extensive list. Along with requisite shovel and blanket she thought to add an ice pick, Morse code machine, fluorescent jacket and a crib sheet on how to make an igloo. I felt compelled to suggest a St Bernard as well.


L thinks he can go anywhere because he has a 4x4 and he's definitely basking in his elevated status. The rest of us are forced  to drag ancient ski-wear from the back of wardrobes and waddle across the snowy landscape as dayglow Michelin men. Trying to keep warm indoors without using up the extortionate heating oil tends to blur the line between what constitutes acceptable daywear and pyjamas. I was tempted by one of the weekend offers in the newspaper - a double slanket (a blanket with sleeves for the uninitiated). It was offered in a wine colour with a hood much like a Galactic robe but, although the idea of pretending to be conjoined Jedi knights was weirdly appealing, I'm not quite sure that I want to be that close to anyone while ensconsed in 100% polyester microfibre, even The Wonderful Man. He's usually quite warm enough without extra static electricity or fire hazard materials. 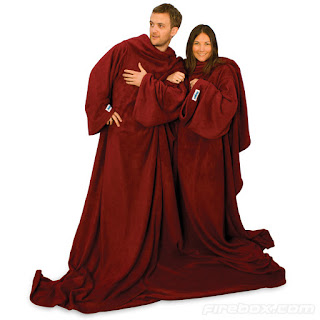 Posted by Mama Macfennell at 13:56