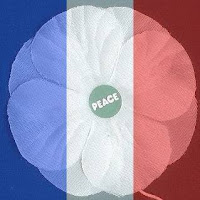 I had begun to write a post for Armistice Day but  I was finding it hard to write anything that didn't sound glib or mawkish. Having given up and left the post in my Drafts folder, I was compelled to resurrect it when the dreadful news about the terrorist attacks in Paris quite literally exploded onto our screens.

The sense of panic and terror was almost palpable. If it can happen in Paris it can happen here. Our proximity just across the Channel and the fact that, although we hate to admit it, we have much in common with our Gallic cousins, made the attack feel more personal. Perhaps this feeling has been forged from much shared history (if we weren't at war with one another then we were busy forming alliances). The English language alone bears witness to this - 29% of our lexicon is in fact borrowed from French.

There were criticisms of the amount of coverage given to Paris when compared to similar recent attacks in Lebanon and Iraq. I think this is, sadly, a reflection of human nature. We seem to have a limited capacity to care and we are, selfishly, more sensitive to victims closer to us both culturally and politically as well as geographically. The media is biased, this is true, but we as media consumers are also to blame for this inequality in sympathetic response. An attack in the heart of Paris, the city of romance, has had more power to shock and this type of atrocity is less frequent than reports of bombings in the Middle East. Morally we should care the same amount about all victims but it would be hypercritical to say this is always the case.

I'd like to think that this event expands our capacity to care rather than increase any tendency to hatred and division. Yet, it is worrying to hear about the rise of racial abuse and the ignorant accusations hurled at Muslims both here and in France. Fear breeds intolerance and suspiscion. You need only look at the mixed reactions to the first arrival of Syrian refugees in Scotland this week. Abhorrent extreme right-wing groups are quick to stir up anti-migrant sentiments in the aftermath and there are cries to close borders and deny aid to the increasingly desperate trail of refugees.  I hope and pray that the feeling of being under threat will foster a sense of empathy, support and solidarity that will, in the end, be stronger than hate. Love not war. 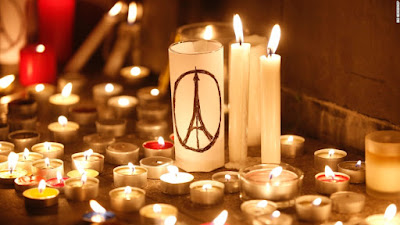 Posted by Mama Macfennell at 14:03