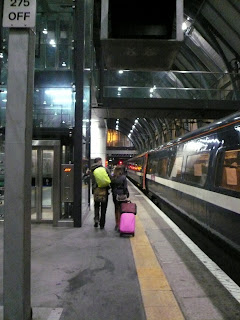 Last weekend we set off on a jaunt down to old London town.  It’s been a long time since I’ve attempted to travel on public transport, especially with the entire family, but once on board I was reminded of two certainties about train travel.  Firstly, that you are guaranteed to be delayed. There are a multitude of lame excuses used to explain the hold-up but the most frequent at the weekend is 'engineering works' or possibly a cow on the line or some other errant farm animal.  Fortunately, the delay was mercifully short and we were spared the miserable experience of the 'replacement bus service'. The second certainty about train travel is that even though you have booked a seat and have the proof of your reservation clearly displayed, someone else will brazenly be sat in it.  On this occasion a solitary old man had set up home at our reserved table for four.  He was festooned against the window in an enormous tartan scarf and about to pour out what looked like a second cup of elderly tea from his ancient thermos.  He looked so comfortable I hardly had the heart to ask if he would mind moving and ended up searching for a spare seat for him and then helping him to decamp.

Travel on the East Coast network is an experience much like sharing a narrow and overcrowded sitting room with a whole host of strangers.  You are forced to acknowledge individual quirks and foibles at close range.  For example, the couple opposite, who sat one side of the much coveted table seats, seemed to have a whole party picnic going on.  The train was only part way out of the station when mini bottles of wine appeared from a Mary Poppins-like bag complete with party napkins and colourful plastic cups.  Next,  came the hot and spicy flavour Pringles which were munched enthusiastically at high decimal range.

Behind us was a cluster of grungy-looking students clearly heading home with a term's worth of washing overflowing from their backpacks.  Their grunted conversation was punctuated with the inevitable filler 'like' every few words and followed an endlessly circular theme of: "Like, that was some party",  "I was, like, so wasted", "I don't, like, even remember, like, how we got back?", "That's because you you were, like, so wasted", "Yeah, like that was some party" and so on..and on.

Looking round the carriage the other thing that stood out was the plethora of iPhone, Kindle, iPad and tablet that covered every available surface. In amongst this hive of 21st century connectivity there was someone attempting to travel with the most dated and unwieldy of laptops.  This luddite had infiltrated the 'cool' carriage with a laptop/tabletop the size of Mars.  The cinema-sized screen blocked out all light like some kind of electronic eclipse. Nevertheless, he sat smugly with his underwhelming technology and watched a steady stream of equally naff movies, oblivious to the looks and sneers of other less-endowed travellers.  For my amusement, apart, of course, from the merriment that is the East Coast trainline, I chose to partake of that old-fashioned but delightful occupation...looking out of the window. I love the constantly changing scenery of passing towns and villages, imagining what it might be like to live there.  Through the window I viewed tantalising glimpses of the lives of others and I wondered what their stories might be.  Being held captive as a passenger forced me to slow down and be mindful of the moment - my breathing slowed and my muscles relaxed.  Such a beautiful ribbon of images danced before my eyes - the unspoilt coastline of Northumberland, the hay bales dotting the autumn fields,  vintage little stations evocative of The Railway Children, the brightly lit arch of the Tyne bridge - all caught and held my attention and provided an alternative and far more inspiring entertainment.

Joining in with Suzanne at 3 Children and It and Oldies but Goodies.

Posted by Mama Macfennell at 21:35

Email ThisBlogThis!Share to TwitterShare to FacebookShare to Pinterest
Labels: Adventures