The 1st of November brought some bad news to the Little House and caused such upset that I had no inspiration for a post for a while and all was quiet on the blog front. I'll write a little more about it in a later post once I've processed it all but, in the meantime, I thought I would focus on warmer, happier things and to me autumn has more than its fair share of these.  I know many people do not like Halloween and all it represents but I like to think of it as a time for fun and games and a little merriment before the last autumn month and the gloominess that seems to set in late November. Like Guy Fawkes night, it's also a chance to get together with friends and enjoy the warmth of good food and good company. Here's a little round-up of our evening.

In Scotland we call Trick or Treating 'guising' instead after the tradition of disguising yourself by dressing up and visiting neighbours to tell a joke, recite a poem or sing a song. 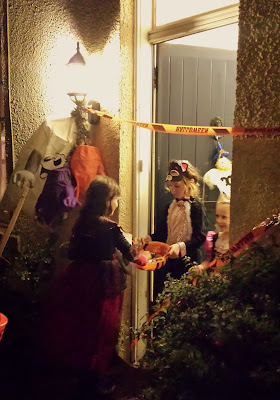 I much prefer the idea of earning your treats with a bit of entertainment rather than just expecting to be given something under threats! Here's one of the girls' best jokes (yes they really were that bad):

Perhaps inspired by her recent trip to see The Lion King, H donned ears and a tail and with a little creative face paint was quite the pantomine tiger. 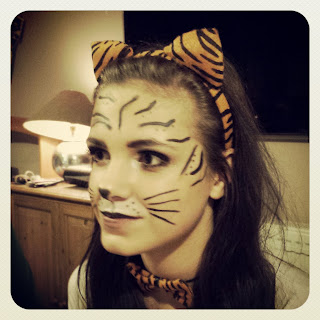 S, who is currently consumed by The Hunger Games series, decided to be its heroine.  Fortunately, her big sister has perfected the 'Katniss braid' and was able to do her hair and, with wooden bow and arrow, she looked the part though I'm not sure the many retired folk in our village would have had any idea of who she was meant to be - Pocahontas maybe?! 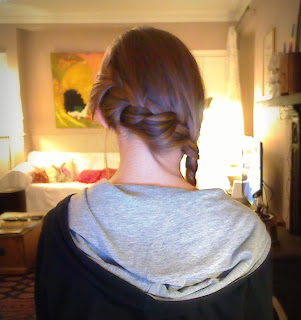 Halloween would not be complete without  'dookin' for apples (removing an apple floating in a basin of water without using your hands, either spearing it with a fork held in your teeth or by biting it). 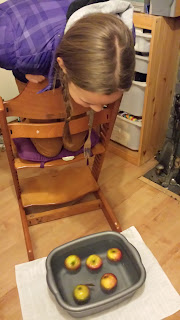 We now have a whole box of Halloween decorations to keep the Christmas boxes company and every year I have to try and de-tangle the various decorations from witch wigs and fake cobwebs. Our collection includes three rubber rats with red eyes. They always end up on the dining table  - a delightful addition to the fruit bowl!

Rats and fake bats and fake cobwebs are all very well but the centrepiece has to be the craved pumpkins: 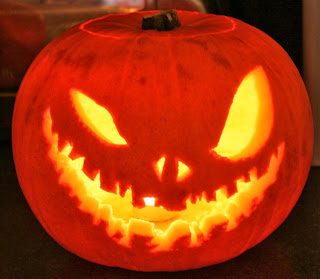 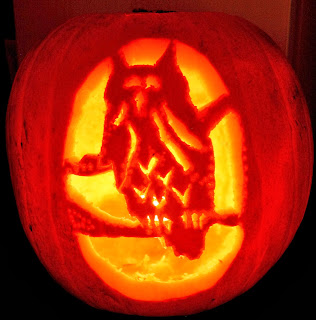 And always, every year, one decoration gets forgotten and so it was that a few days later when everything (or so I thought) had been packed away I spied a little glow-in-the-dark skeleton hanging nonchalantly on the corner of the TV. I think I might just leave him there till Christmas! 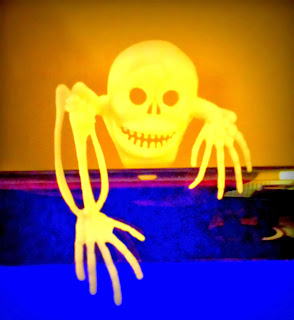 I'm linking this post up with Clarina's Contemplations and her Savouring the Season blog hop:

Posted by Mama Macfennell at 13:33