Well, the Christmas tree has been taken out, the decorations have been put away, there is space in the fridge and the dieting adverts have started. I always find this time of year a bit depressing, even more so this January with the relentless storms and torrential rain. I thought I'd cheer myself up with a little look back at our New Year celebrations or Hogmanay as they say in Scotland.

We have a few traditions for New Year one of which is the requisite walk.  I think we feel slightly less guilty about impending revelry if we've worked a few calories off beforehand.  We're very lucky to have some very dear friends that come to spend Hogmanay with us every year. We've known them for at least 16 years and so I think we've probably completed nearly as many New Year's Eve's walks in that time. This year we kept it very local and headed towards the Dunglass estate and on down the decidedly muddy path to the beach.

Dunglass Beach is rock and shingle and forms part of the John Muir Way - a continuous path that links East Lothian with Edinburgh and the Scottish Borders. The pathway winds down through the steep valley where the Dunglass burn gradually opens up into the sea. It feels remote and even on the sunniest day in the summer, few people venture there. East Lothian offers more accessible sandier beaches but for me, Dunglass is more magical.

We lost track of time, wandering along the shore, throwing stones in the water and looking out towards Torness Power Station which looks like it might be floating; a strange box-shaped ark.  Not many people see anything aesthetically-pleasing about it, or would want to have a nuclear power station so close, but I have grown used to its ugly beauty. Whatever feelings I might have about nuclear energy, the building itself often appears chameleon-like and seems to change colour, matching the surrounding light and particular hue of the sea. 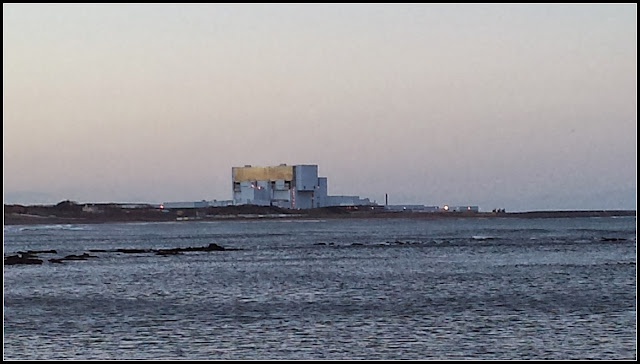 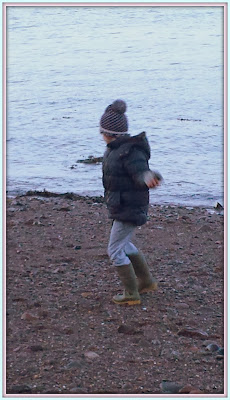 Back at home we got ready to party (well, party as you do when you're the wrong side of 40 and there are eight children present!) Another New Year tradition which is guaranteed to lift the gloomiest of moods is the Danish Parcel Game. It's a little long-winded to explain so you can read more about it here if you're interested in playing it yourself. Basically, guests bring one or two wrapped parcels containing inexpensive, silly items that you wouldn't necessarily want to receive ( I tend to buy things over the year). This year, parcel contents included: glow-in-the-dark glasses, a chocolate tool set, a pop-up pint glass, instant noodles and an inflatable 'air' guitar - you get the idea!

The pile of often unusually or bizarrely-wrapped items is placed in the middle of the table and players take turns to throw a die. If you throw a six you are allowed to select a present. There are several different versions of the game at this point but once all the presents have gone and been opened then a timer is set and the process of bartering and exchange begins. This has to be done quickly and it gets a little manic. Some versions of the game suggest re-starting the throwing of the die with players able to steal someone else's presents but small children (and some more sensitive adults!) can find it a bit upsetting so we stick with the free for all and the swapping - equally amusing. 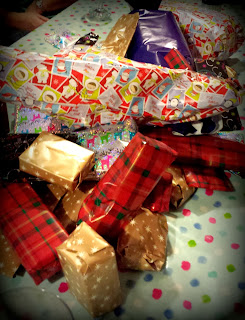 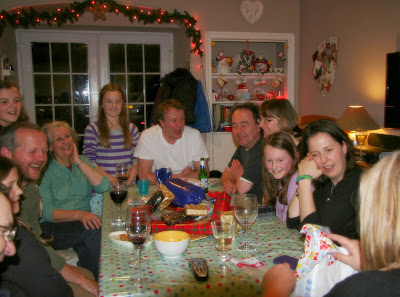 Well, all that's left to say after all that nonsense is a big thank you to anyone who has visited my blog this year and regularly reads my witterings. Wishing you a 'Happy New Year!'

Posted by Mama Macfennell at 22:21

Email ThisBlogThis!Share to TwitterShare to FacebookShare to Pinterest
Labels: Celebrations