Autumn always brings to mind one of the great childhood pleasures - den building.  I think it is probably the dry leaves and abundance of fallen sticks and branches, plus the idea of hibernation, that create such nostalgia.  Yet, if you ask children today about building dens you'll often get a blank look in return. If they do give an enthusiastic response then the chances are that most of their creations have been made indoors or as one 10 year old told me, 'I like Monsters Den' - an online adventure game! 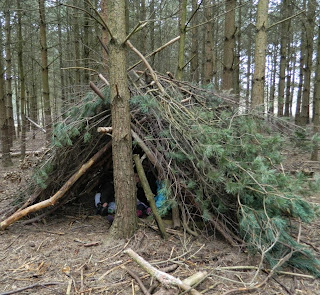 Not that I'm knocking the indoor hideaway in any way. I have great memories of setting up camp under the dining room table, behind the sofa or simply hanging a blanket over a clothes airer. But, there is a real Bear Grylls-type thrill in gathering natural materials, building something outside and attempting to keep out the elements.  The problem is that outdoor play space is more limited now and parents are, understandably, anxious about their children's safety if they are out of sight, even for a minute.  It's a shame because I think dens play an important part in childhood development. It's no coincidence that the appeal of creating such a space tends to start as a child's sense of self develops between the ages of 3 and 7. Dens in this sense become like a little home for the soul.

When we lived in Somerset, S was lucky enough to go to a lovely Steiner-inspired kindergarten and later she spent some time at forest school.  The kindergarten had the most beautiful playstands that were set up with a silk canopy that added privacy but let the light filter through. A playstand is really like a more crafted version of a wooden clothes horse but, unlike a manufactured playhouse, their simplicity allows them to be far more open-ended - this play space is often used as a house but it could equally be imagined as a cave, fort or a magical tent.  A quick search on Pinterest certainly has some inspiring images and tutorials on how to make your own. I badgered L to make some for us when the children were younger and now we still use them as functional shelves around the house.

At the end of our garden we have a ready made den.  Being terrible gardeners, the vastly overgrown hedges, weeds and ivy have joined forces with the conifers to create a hidden glade.  S has added her own furniture (commandeered pallets from our builder neighbour) and made a doorbell. She has also made a sign, making it clear that adults are not allowed! Many happy hours have been spent there playing out imaginative games both by herself and co-cooperatively with friends. Her older sister was pelted with mud grenades once when she dared to peek in!

As well as this hideaway there is a lookout too, up in the tree outside the front of the house. It's useful for pirate games but S is most frequently found there with a book, Luna by her side.
Do you ever grow out of den-building, I wonder? I think all we do is recreate more sophisticated versions in our homes and gardens. I could possibly argue that my bed has become a bit of a den, especially on weekend mornings, with cushions, books, smuggled supplies of biscuits and mugs of coffee on the side table. It's definitely a place to hide away from the housework and to be honest...the responsibilities of being an adult!

Linking this post with The Theme Game at The Reading Residence

Posted by Mama Macfennell at 16:18