Close Encounters of the Celebrity Kind 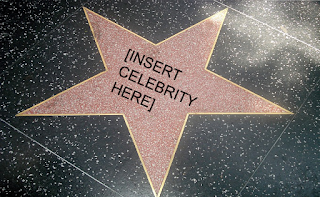 I once gave directions to Van Morrison; on another occasion I was nearly run over by Mariella Frostrup, and, one time, while waiting to pick up pizza, I awkwardly complimented Paul Weller on his shoes.These are just a few of the random celebrity encounters I have had over the last 35 years but they are, for various reasons, some of the most memorable.

There is nothing special about me, I lack the tenacity to be a stalker and I am not in a job where such meetings are inevitable. The truth is more mundane and the result only of coincidence of place and time. Pretty much everyone I know has had at least one such encounter and a quick trawl of  Twitter reveals it to be awash with tales of such incidents that occasionally turn out to be inspiring, but often disappointing.

An 'encounter' is defined in the dictionary as 'an unexpected meeting' and it is this that makes the experience very different from the contrived. Joining the crowds on the pavement at some premiere, going to a YouTube meet-up or handing over a book for signing at your local Waterstones is not quite the same. Casual encounters with A-listers surprise us as they suggest that these earthly gods might, in fact, be just like us - they get lost, drive badly and eat pizza. Glimpsing them unguarded or without the usual entourage reveals them as just people.

Back when I was in my twenties (how ancient that makes me sound) there were no mobile phones to record such encounters and no social platforms to share the proof. Perhaps that meant that celebrities, minor and major, felt less vulnerable and more able to do 'normal' things. Certainly, I can't imagine that anyone remotely famous must be able to eat in a restaurant nowadays without being filmed or being constantly interrupted with requests for a 'selfie'. Much of the reason for this is that the modern celebrity presents themselves in perfect form: the posts on Instagram have been selectively curated and edited, paparazzi carefully prepped on where and when to get the best shot. It is not surprising that we do not recognise the famous as one of us and, perhaps, excuseable that we are either disappointed or delighted when they slip up, depending on how much of a fan we are.

In a media lecture I remember first learning about this so called 'halo effect' - the psychological phenomenon where if someone has a particular talent or is highly rated in one area - attractiveness for example - then we assume that they must be equally superior in all other areas. Of course, promotion and endorsement plays on this skewed perception, fooling us into thinking that if they wear a particular logo or use a certain brand of make-up that some of that 'celebrity magic' will somehow rub off on us; sometimes, in the young, this is to a dangerous degree. A chance meeting, if only brief, gives us a chance to view the famous from a different perspective - this time as a fellow human being with the same foibles and idiosyncrasies.

To me, Van Morrison is an icon - the finest songwriter there is - and so when I met him at the doorway to my local cafe, when I lived in London, and realised who I was giving directions to, my heart thumped right out of my chest, and, not being very good at directions anyway, I then became hopelessly tongue-tied. What I wanted to do was tell him how much I admired him or, cleverly, quote an appropriate lyric; what I actually did is mumble and stutter hopelessly inaccurate directions. It was only when I staggered breathlessly into the cafe and spoke to the friendly Iranian owner that I discovered that Morrison was a frequent visitor; the owner even showed me where he liked to sit and revealed that he was quite partial to a sausage roll! I was stunned. I had been to that little cafe so many times so it was quite likely that I had, unknowlingly, sat on the next table to him. "I treat him just like any other customer," the owner said proudly and I agreed, somewhat disbelievingly, that he was really just like us. I went back, more often than usual, forever hopeful that I'd run into 'Van the Man' again but he never returned. I think my stunned reaction scared him off, either that or he's still wandering around west London...

Posted by Mama Macfennell at 18:45