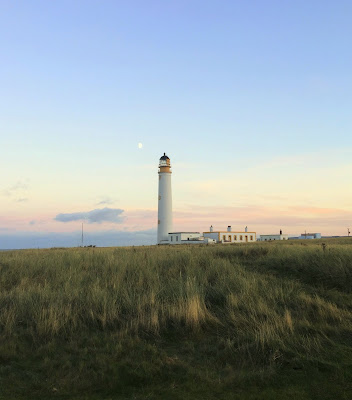 I seem to have a fascination with lighthouses, I'm not sure why. I think it must be a childish delight. On the one hand they make me think of fairytale towers, pirates, smugglers and the lighthouse keeper's cat but on the other, I think of isolation, storms, shipwrecks and that terrifying episode of Doctor Who - 'Horror of Fang Rock'!

Fortunately, there's nothing terrifying about Barns Ness Lighthouse. Although it is in a fairly lonely spot, standing on a strip of coastline completely exposed to the North Sea, it is enchanting.When we first moved to this part of Scotland I was surprised to discover it as it is incongruously situated between the cement works and the nuclear power station.


At low tide you can see the layers of sedimentary rocks between the pools and shingle - one of the reasons this is designated as an area of special geological interest. It is also a migration watch point for bird watchers and coastal forragers searching for all kinds of treasure: mussels, whelks, razor shells, corals and fossils. 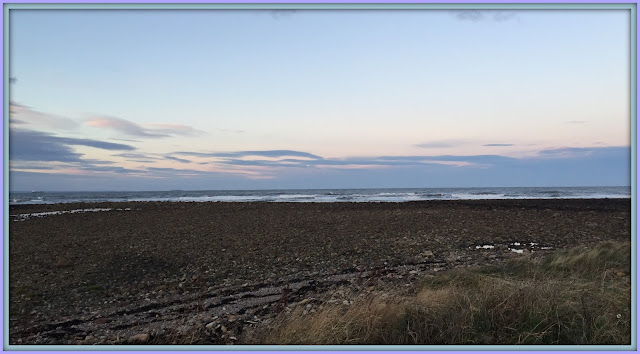 The lighthouse itself came into operation in 1901 and was finally deactivated in 2005. Made from local stone it withstood attack during the war Until 1966 it was manned by two lightkeepers which explains why there are two identical cottages alongside as well as the old engine house. These buildings are privately owned today and the lighthouse has become the ideal spot for abseiling, the last brave soul being our local minister who took up the challenge for the Bethany Trust just a few months back. Sometimes I think it would be rather romantic to live in a lighthouse but then I think of the practicality - Barns Ness has 169 steps to the top!


Today, buttoned up in warm coats and wrapped in hats and scarves, we took a short walk with Luna. It's perfect for dog walking as grassy banks and well kept paths mean no mud! I attempted to capture some of the magic of the place. The light was just beginning to fade and you can just see the moon making its early appearance. 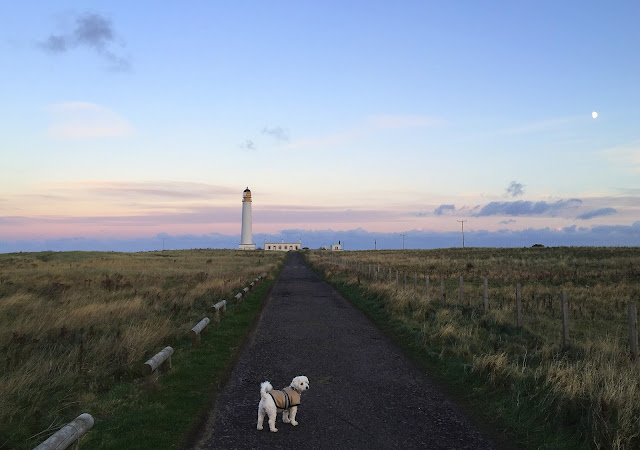 Posted by Mama Macfennell at 00:37