The Name of the Game

Katie Hopkins seems to have caused quite a storm in a teacup, hasn't she. Her unabashed announcement that she judges her children's friends' social status by their Christian names and would never let them play with anyone called Chardonnay, Charmaine or Tyler in case they 'dragged them down' was outright snobbery and I'm sure that her children will be short of  party invites for some time! I had never heard of Katie Hopkins before, not really being a fan of The Apprentice, but she has certainly ignited a right row about the British tendency to make judgements based entirely on social class. 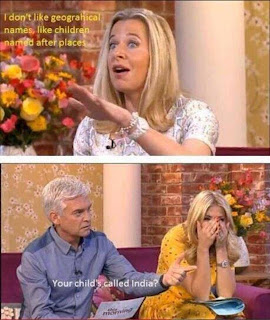 I hope my children are capable of choosing their own friends on the only fair and sensible basis - that of character. I do think though that sometimes parents saddle a child with a name that must hinder their chances of being taken seriously.  If you are not the child of celebrity parents it must be very difficult to pull off a name like Peaches or Apple. North West is sort of amusing, I suppose, but I sincerely hope that Blanket chooses a more adult moniker for himself and that Moon Unit Zappa considers something more earth bound! 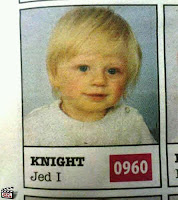 It's often only when a child starts school that a name causes problems. I imagine that when Woody Allen and Mia Farrow's son, Satchel, started his education it would not have been a happy experience and it's not surprising that he changed to being known by his middle name, Ronan, as soon as he could. When I started school I had a friend with the very plain name, Alison Plant, which doesn't seem that funny but we all found it hilarious when she was referred to as A Plant! When S started school we were living near Glastonbury and her class mates sounded more like the cast for A Midsummer's Nights Dream with names like Aurora, Raven and Titania.

As a teacher I often come across unusual names and sometimes I've been guilty  of making unfair assumptions about a child or their family before meeting them. In my years of teaching I have come across a Promise, a Blue, a Thursday and a Taome - which I thought must be an ethnic variation until her parents enlightened me by explaining that this stood for 'The Apple Of My Eye'. Then there are the weird spellings to deal with - Leesah (Lisa) and Mykel (Michael) not to mention the dyslexic nightmare of Celtish names such as Siobhan or Niamh or Ruairidh.  Don't get me wrong though, I like all of these names, well maybe not Promise so much, especially as her promises to behave were endlessly broken!

It's tricky this naming business.  I remember with our firstborn that not everyone was enamoured with our choice of name, feeling it was very old-fashioned and we faced criticism again when we gave a French first name to our youngest. Names do tend to reveal your age and the influences of the time. I rarely meet another Helen who isn't around my age and I wonder how many boys currently are called Gale or Peeta or girls called Primrose or Katniss. Of course, sometimes well-intentioned first names are given that only become funny through marriage; I'm thinking of an ex colleague called Beverley who then married and became, would you believe, Beverley Hill! 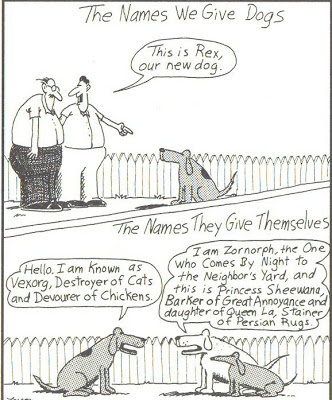 Names should have, I feel, some importance or significance even if it's just that you've always liked it. So I guess if you want to call your daughter after your favourite grape variety or your son after the place of conception then that's your prerogative. It is easy to change the name you are given, even if not officially, why else would so many forms have a 'known as' box. What isn't so easy to change is the abhorrent attitude of Katie Hopkins - stubborn prejudice and narrow-mindedness seem all too common.

Joining in with The Monday Club hosted by Hello Wall and Diary of the Dad.

Posted by Mama Macfennell at 12:09

Email ThisBlogThis!Share to TwitterShare to FacebookShare to Pinterest
Labels: Moans