In praise of teashops and a grave confession If anyone asks me about my hobbies I always struggle to give an appropriate response.  I feel quite sure that  the properly middle class have suitably accomplished answers such as playing golf or bridge, some kind of craft activity perhaps, gardening, hill walking, mountain biking... (those last three by the way would feature in my own personal definition of legal torture). 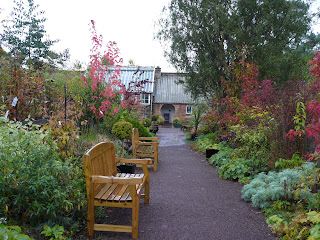 My interests tend to encourage a fairly sedentary lifestyle and none more so than my predilection for teashops; this results in another long-standing pastime– counting Weight Watchers points and my constant battle with growing girth and derriere. Any excursion is never considered complete unless such an establishment has been visited.   One of my particular favourites is Smeatons, a mix of garden centre, art gallery and conservatory-based tearoom.   I’m not sure of its history, but in an area of Scotland devoid of shopping malls or stately homes it is fairly popular as a nice place to go. 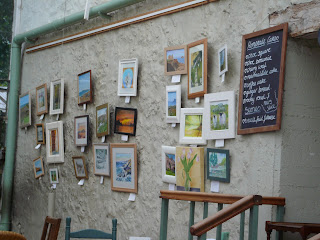 The sloping roof of the Victorian conservatory has been accessorised with sail-like drapes to shade customers from the searing heat of the Scottish sun and bare light bulbs are disguised with large round paper shades á la the 1970s.  Terrible paintings by presumably local ‘artists’ are hung higgledy-piggledy on the damp walls and labels are attached with optimistic prices.  Today, while enjoying a cappuccino and (half) a piece of marmalade cake (at least 5 Weight Watchers points) with L, my eye was drawn to a picture of a dysmorphic hare for sale at £80.  At least I think it was a hare though it could quite easily have been a rabbit with a very small head or large ears either way. 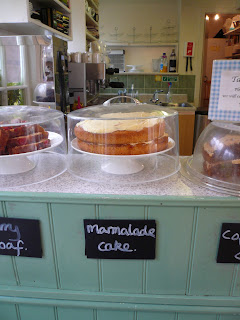 This post is making Smeatons sound less than attractive and I am perhaps being rather harsh.  The fun of the place is this curious mixture and it really wouldn't be quite as charming if it didn't have the accompanying artwork, peculiar cakes or interesting decor.  The waitresses are languid girls, polite but without expression or conversation and the place always brings out the mischievous side of my nature; in short, fuelled with forbidden carbohydrates and with an unnatural caffeine high, I become badly behaved.

Last summer, while sat at a sticky table in a forgotten corner, I was encouraged by my like-minded mother and companions to indulge in some minor vandalism.  Beside our table was a raised area, rectangular, with potted plants arranged on a bed of gravel.  It was at exactly the right height for errant toddlers to climb on to and the management had placed a typed and laminated notice there informing parents not to let their children play with the gravel.

It struck me that this area was burial-shaped and so taking a small sliver of white paper, and re-purposing the stickiness of the table onto the back of it, I covered up the letter 'l' in the word 'gravel'.  Snorts of laughter and much merriment ensued as I showed the rest of our party what I had done.  This amusement continued for some time, as on later visits, choosing the same table, I noticed that my defacement hadn't been spotted and parents were still being advised, alarmingly, not to let their children play with the 'grave'!
Posted by Mama Macfennell at 18:16